As entrepreneurs, it’s been ingrained in us to always persist to the end and never let go of our vision. So we hold on to our dreams and keep plodding through thick and thin while taking no prisoners. We equate letting go with failure and holding on with grit.

But, what if I told you that the exact opposite is true? That holding on will slow you down and letting go will accelerate your journey to success?

Got your attention now? Read on...

The Fallacy of Holding On

Whether you have entrepreneurial blood coursing through your veins or not, when it comes to achievement, if you’re like most of us, you’ve likely been conditioned throughout your life to always “stick to your guns” and not stop until you get what you’re after.

Now, this is quite easy to do if what you desire is within your control. Say, if you want a new car that’s a bit above what you can currently afford, you can always work extra hard to save more money until you can make up the gap.

But, if what you want is outside of your control, sticking to your guns and trying to “force” the outcome won’t work most times. In fact, more often than not it’ll backfire on you.

For example, say you’re super focused on landing an account that turned out to be really hard to get. So, you work countless nights putting together a great sales package, but perhaps you failed to understand the real motivation of your prospect and the deal falls through in the end.

Or perhaps their real motivation was to “mine” strategic information from you and never intended to give you their business in the first place.

In this scenario, letting go of the deal is the most beneficial path to follow. Trying to force a deal will only result in frustration and disappointment. And these negative emotions will prevent you from thinking creatively and turn a bad experience into a good one.

But if you let go of the deal and instead use your great sales package to pursue other opportunities that are better aligned with your interests, you’ll be much better off in the end.

If I Let Go I Won’t Get What I Want 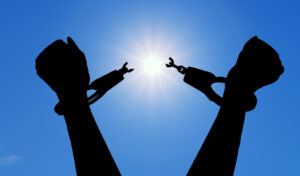 As entrepreneurs, we're wired to “never quit.” But, while in the grand scheme of life this may be very useful, in your day to day life you need to be able to strategically let go when the road you’re traveling is not the best path for you.

Now, this doesn't mean that you’re giving up on your goals, it just means that you’re letting go on one part of your plan while you pivot your energies to another.

Being stuck against a wall and trying to push and push to see if it moves will waste precious resources that could be put to better use elsewhere.

For example, many super successful ventures only found success after pivoting dramatically from their original goals. YouTube was originally launched as a video-dating site. Starbucks started out selling espresso machines and coffee beans. Twitter began their life as a podcasting platform that didn’t go anywhere, Netflix started out renting DVDs by mail (streaming wasn’t part of the plan until many years later).

The Power of Letting Go

Many times, the only way forward is revealed after you let go of your original goal. This is not a sign of weakness but a sign of maturity.

Believe it or not, the central premise of my how-to business book on startups and entrepreneurship, Getting Naked, is about letting go — that’s how powerful I believe this practice to be.

In fact, none of the above global brands would’ve become the behemoths they are today if they hadn’t let go of their original vision when it didn’t work out.

The same applies to your business (and personal) life. The trick is to know when to stop holding on and letting go so that you gain the freedom of thought necessary to know when and how to pivot to a new plan.

This is the true power of letting go!